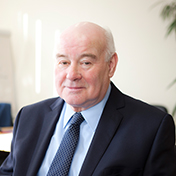 Brian has a long career in engineering, auditing and certification.
He commenced employment in Harland & Worff initially as an apprentice fitter, progressing through the production engineering department and the engineering design department, ending up as a machine shop manager.
On leaving Harland & Worff, Brian moved to offshore construction and inspection for four years.
In 1981, Brian commenced employment as offshore certification officer with the I.I.R.S which was involved in the certification in Drilling in Irish Waters.
On transfer to NSAI Brian headed the ISO 9001 programme in Ireland, America and Europe for six years. Since 2004, Brian was the programme manager for security covering both development of standards and certification for the security sector until retirement in 2013 and subsequently joined EQA as a Principal Auditor ( Security Schemes ). Brian was appointed a member of the EQA Governing Board in 2014.
Brian is a fellow of the Security institute of Ireland as well as holding a Higher Diploma in security management and is a qualified security Industry trainer.